There’s a new God in the universe … and he goes by Barack Obama. Yeah … that guy. Who won’t go away.

The New York Times found him … and Maureen “Mary Magdalene” Dowd revealed him. To us all. Amen.

So tomorrow,  expect new rally caps all over the Universe … with the new God’s new message …

Our new God is gonna love it … even though it’s not all that original.

“Maureen Dowd is a Pulitzer Prize-winning journalist and op-ed columnist who has written for The New York Times and Time Magazine.”

And soon she’ll add The Barack Scriptures to her resume … and probably make room for another Pulitzer on her crowded mantel.

Stay the hell away from the water coolers at the New York Times! There’s been an outbreak of something.

Yesterday they praised the new economy of Donald “The Devil” Trump. Then they fired the old God. But they saved the day … by anointing Barack Obama. So it’s all good. Despite the mood swings.

Dowd’s weekend column was so drippy … and whiny … and cringy,  I was sure it was a spoof. A literary burlesque from the Queen of the Gray Lady.

I was wrong. Real wrong.  She was serious.

And whatever she caught at the water cooler is serious, too … because it’s spaghettied her noggin. And now she’s writing in tongues. Scribbling some scary shit.

“As president, Obama always found us wanting. We were constantly disappointing him.”

Do you know how that makes me feel? Like this small.

Because I let God down. I disappointed Barack.

So, I’m fallin’ on my knees right this very minute. Yes, I am. And you should, too. Because he’s the new God … and we let him down.

I swear … I thought some goofy genius was havin’ a very excellent yuck at poor Mo Magadelene Dowd’s expense. I was sure this column was a mega-prank … because it moaned like a seventh-grader pouring her heart out to a classmate whose cat died.

Doesn’t that sound like the preachings of Brother Marvin Gaye? Or perhaps the prophet Luther Ingram?

Maybe we should enjoy a musical interlude. A special hymn. So sing along with us!  Snowflake Sound of Silence 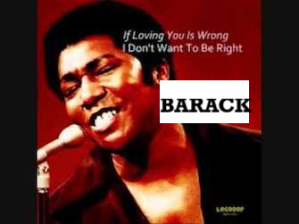 Well, that was fun. Praise the Barack!

Dowd groaned that it was the lament of a defeated savior. A sad God. What could be worse?

“He’s saying that, sadly, we were not enlightened enough for the momentous changes wrought by the smartest people in the world — or even evolved enough for the first African-American president.”

She actually wrote that. She said “wrought” … “WROUGHT” … and then put her name to it. Brave woman.

I could barely read it without spittin’ up a lung. Who writes stuff like that … and then wins a Pulitzer?

Dowd’s got a new disease. “Writer’s Wrought“. That’s what it is! And I don’t wanna catch it. And neither do you.

“Sometimes I wonder whether I was 10 or 20 years too early,” Obama mused to aides.

He actually said that. Obama did.  That’s worthy of a stained glass window, don’t you think?

How could we have been so wrong? What have we wrought?

Holy shit! Did I just say “wrought“. Is there a doctor in the house?!?

Then Mo Dowd quotes one of Obama’s disciples … Ben of Rhodes … who was present at Hillary Clinton’s Last Stupor. That would be election night … when she didn’t descend from a happy cloud.

“I couldn’t shake the feeling that I should have seen it coming,” Rhodes writes about the “darkness” that enveloped him when he saw the electoral map turn red.

So … it was all about Barack. I didn’t know that.  It’s right there. Rhodes said it. God really was disappointed.

And now the new God is sad. Because of what the election wrought.

I would’ve given anything to be smack in the middle of that moment. With the Lord-Savior Barack. But I wasn’t allowed. Know why? Because it was his moment. And no “theses” were allowed.

“He was the man alone in the arena.”

She actually wrote that. And meant it.

Maureen Dowd should take a hammer to her keyboard … and take up ant-farming.

Here’s the link … read it for yourself … But wait 30 minutes after eating or the cramps will kill you.