The NEA/Government Funded  “Clown Conservatory” just happens to be in the San Francisco congressional district of the most famous liberal clown of all time … Nancy Pelosi.

See what I mean?

It also explains the nutty behavior of the liberal goofs … and their addictive preoccupation with all things Trump. And their queer conviction to rub against the grain of mainstream America over every issue … big or small. 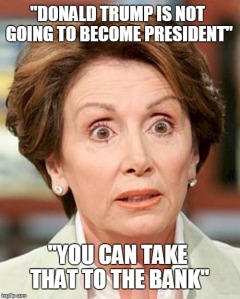 In silly speak, the American Left is a bunch of brats.

Not so long ago … disagreeing politicians referred to each other as the “loyal opposition” …  a respectful term that acknowledged the merit of a rival’s point of view.

Today’s liberal opposition defends the ludicrous. The illogical. And the dangerous.

Media types nuzzle up to liberal politicians … blur journalistic lines … and destroy their own credibility. The Liberal Left is a consortium of bitter politicians and media hacks who want to nullify your vote.

They mock you and your politics … every day. Remember that.

So law-defying sanctuary cities, illegal border crashers, and MS-13 gangsters are fanatically defended by the Liberal Left. And they think this is noble stuff … but heads shake from coast-to-coast.

ICE is to be abolished … so migrants can flood America without any inconvenience.  What wonderful empathy … for anyone but American citizens.  YOU. DON’T. COUNT.

Their contradictory predisposition requires them to defend … with over-the-top indignation … men barging into ladies’ bathrooms. They won’t stand against boys who suddenly identify as girls … so they can dominate athletic contests  … and pollute the spirit of fair competition.

They cannot say “no” to crazy.

And add this late-entry to the asshat crowd … Seth Rogan.

He’s the forgettable film “star” of such classics as “Dumpster Diving”, “Sausage Party”, “Knocked Up” and  … appropriately … “Zeroville”. He thought it was cool to embarrass Speaker Paul Ryan … in front of his children.  Yuck, yuck.

Media morons don’t even try to mask their loathing.  Shouting reporters bury insults in questions. Pathetic Rachel Maddow worked like hell to summon up some phony compassion for border “children in cages”  …  embarrassing herself by trying like hell to cry on camera. It was wonderful comedy … America is still laughing.

Anything is up for relentless ridicule … a father-son photo, a foreign accent … even a pair of shoes.

Now they’ve taken to chasing folks out of restaurants … and gathering at their homes … because crude names and cruder insults aren’t enough. Humiliation is the new goal of their politics.

Liberals will cross any disgusting line if they think it scores them points … just ask Robert DiNero. Or Cynthia Nixon. Or Samantha Bee. Or Michelle Wolf.

The Left has cultivated an image of immaturity that’ll be tough to scrub away.

They have this talent for the juvenile … and the extra-wooly language of gross exaggeration.

They make America moan with boredom.

American liberals are suffering a long-lasting episode of arrested development. Middle America is worn out listening to these cranky moaners. They are pathetically snotty … and predictable.

But America will gladly suffer these fools because …

Anything is better than the Obama years. Anything.

Join 2,125 other followers
Follow Missives Worth Reading on WordPress.com