The irritating parable of Jim Acosta … the disobliging CNN newshound … will become the signature tale of this moment in America.

It’s a cultural x-ray of the creepy DNA that’s now embroidered in much of American society. It’s the tale of the American brat.

And so lying became a much-admired talent of too many of today’s prominent brats … especially in politics and the media.

Ordinary American schlubs like us … who lead real-deal lives … find ourselves stuck in front-row seats … forced to watch tantrum extravaganzas that make us wanna punch the tv … or shove some reporter down in his seat and take away his chocolate milk.

And it’s this nonchalance with the truth that brought us that Kavanaugh disgrace … and this voting debacle … and this dangerous indifference to thousands marching on our borders. Because it’s the brat-class that decides what is truth … and what is not.

Truth-telling has become inconsequential … and too much effort. And it’s never sexy enough. It’s a lot easier to make up juicy stuff rather than search for anything authentic.

So the DayCare Generation of Jim Acosta grew up learning a lot about nothing … and are now fond of proving it time and time again. His generation was the first to be poisoned by schools less concerned with scholarship … and more concerned with kiddies feeling good about themselves.

Clearly … they over did it.

And he’s joined by other superbrats … like Don Lemon, Chris Cuomo, and Rachel Maddow … who insist that their view of the world is extraordinarily exclusive. And anyone with a different interpretation must be a world-class ass.

They demand that their take on everything … from language to events to cultural idiosyncrasies … become the accepted norm for an anemic America that’s begging for their special inspiration.

And these alleged cultural geniuses are further flattered by late-night boors like Kimmel and Colbert and the SNL pre-schoolers …. who take their cues from these sulking narcissists … and then fizz it all up for the twitchy Barista Generation that’s allergic to stress and reality …. in any form whatsoever. That’s why socialism has become their teddy bear.

But it was L’Enfant Terrible Jimbo who became the the talk-of-the-town when he grew so disagreeably bratty with the President of the United States that he was given a pre-school time-out … which led to a media foot-stomp from every brat in the business.

You see … what matters most is that their opinions become the only accepted interpretations for everyone’s reality.  Anyone who questions them has to be confronted … and mocked. Especially a president who wasn’t supposed to be president at all.

It’s quite a circle of jerks who have captured the spotlight … and set out to destroy a president they don’t much like.

So they spend their days making faces and grabbing at microphones … and screaming in the time-out corner.

The only thing missing was a sandbox.

But in the meantime … 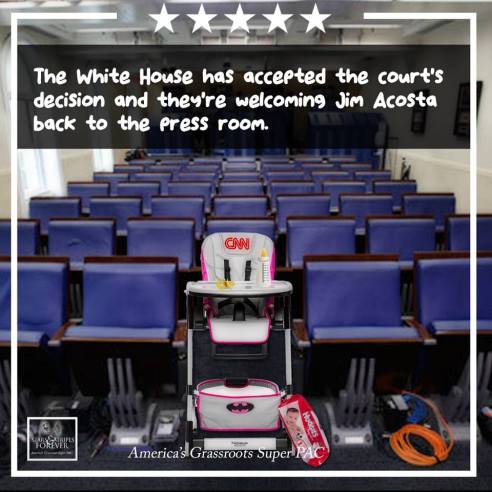