and the Arc de Triomphe is all sooty.

I should care, but I don’t.

I just can’t care about France … or Europe.

Not because I’m an American snob  …  or a fan of the new “n” word … “nationalism.”  I just won’t let myself care because all of this globalism gunk started there. In Italy and France … and the UK. And especially with those guilt-ridden Germans.

Borders have collapsed … and proselytizing Muslims packed up and headed to the land of Merkel and Mays. There they grew fat … and powerful … and arrogant … on Europe’s generous welfare … while they tore the continent apart.

And that’s exactly what we’re trying to avoid here … on our southern border. Preventing a breakdown that convulses us … and over-doses us on political correctness.

Some American politicians don’t think this is a very good idea at all.  At least their silence says so.

They’ve said nothing about the chaos at the border. Offered no reassurances  … no support of any kind.

Sacrificing your nation’s security for political gain. Using America  …  and our families …  as political bargaining chips. Selling out our way of life … because it’s good, personal politics.

But that’s poisoned politics.  And it’s a European fad we should send right back.

Europeans invited their troubles. Waved them in. Then made them worse. They’re good at that.

“Broken glass and empty tear gas canisters … burned cars … and smashed store windows in several of the wealthiest neighborhoods … law enforcement officials  said that the situation was close to an insurrection.” 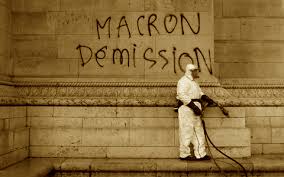 Everyday Frenchmen have had their fill. They’re sick of being a political after-thought. Sick of paying for liberal fascinations.  That’s what’s driven them to the streets.

“None of the … protesters expressed allegiance to any politician: Most said politics disgusted them.“

They need their own Donald Trump.

A French Trump. And an English one, too. A Trump for Italy and Spain. Another for Belgium and Sweden.

Someone who “doesn’t tiptoe around the thousand new rules of political correctness.”

Leaders who can save Europeans from themselves.