“Confidence is a nice suit. Arrogance is the same suit … with suspenders, Italian loafers, and gold cuff links.”

Not quite content with a modest marker for his father’s grave, he decided on a three mile long masterwork … a bridge … across the Hudson River … which might yet be renamed the Rubicon if this political season can supply some sweet shock.

Cuomo the Lesser is offended that New Yorkers are offended by this publicly-funded, family memorial to which they’ll be mortgaged to for the rest of their mortal lives.

And that, dear plebeians, is a tell-tale symptom of congestive arrogance.

This public tempest has more than pricked the dutiful son … and now he’s full of snit.

After all … the loyal-royal son reasoned … it’s just a three mile long bridge, for goodness sakes. It’s not like a movie trilogy.

“It’s a brand new bridge,” insisted the Govfather. “It deserved a new name … there’s nobody who could say (Mario Cuomo) wasn’t a man of quality …”

Is that an offer we shouldn’t have refused?

I guess this is where the soundtrack kicks in … and Andrew stuffs cotton balls in his jowls … and does the Marlon mumble.

Get a load of this …

“I am the government.” 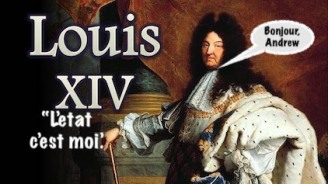 I didn’t know Louis was a pal.

In 2014, His Holy Righteousness decided to purge New York State of undesirables … “The Bad People” … citizens who were pro-Second Amendment, anti-abortion, and not-so-hot on gay marriage.

“… they are the extreme conservatives … they have no place in the state of New York.”

And that’s why New York State is the home of tolerance.

Everyday New Yorkers think it’s impolitic. Freakin’ ballsy. And they’re sick of narcissistic public servants who are quick to serve themselves … or their relatives. 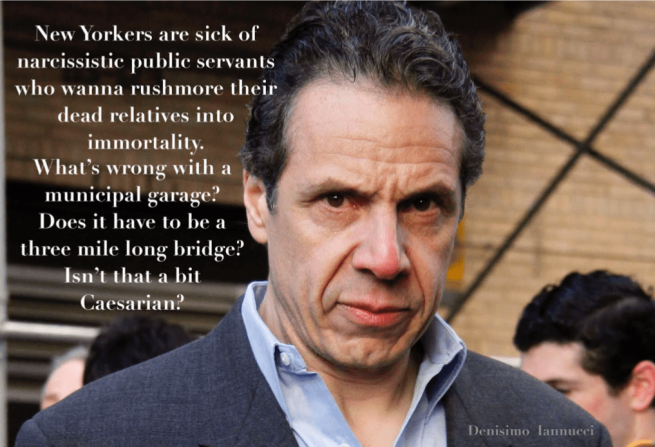 But Il Duce demands that we like that bridge … because it’s his father’s bridge. Dad’s bridge.

You should just shut up and pay for it.

Join 2,125 other followers
Follow Missives Worth Reading on WordPress.com