The feds have captured the public schools …  and now they wanna make sure you can never escape.

Orwell yourself and come to terms with what awaits your children on the horizon of government controlled education.

Huxley yourself into the world of tomorrow when they will be plugged into lifetime situations based not on their passions … but on some algorithmic prescription burped out by some electronic ouija-motherboard.

Pushing Parents Around  is a time-honored tradition among America’s snob class. 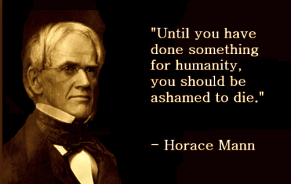 He was America’s first authoritarian educrat to view public schools as social engineering centers … where the ills of the masses could be made … um … less disgusting.

He was a social-snot … with a special loathing for the Irish. Irish Catholics, to be precise.

“Those now pouring in upon us, in masses of thousands upon thousands, are wholly of another kind in morals and intellect …”

So other Massachusetts’ highbrows put him in charge … saw him as the society-saving antidote to “perverse moral education provided to children by their corrupt parents.”

Why do all these school folks hate parents anyway?

Horace Mann also hated homeschooling … even though the Massachusetts literacy rate in 1850 was 97 percent. That’s better than right now!

It wasn’t that parents were doing a lousy job … they were doing too good of a job!  And that had to stop!

They were raising free thinkers. Independent sorts. With ethics preferred by mom and dad.

Fast forward a century and a half … and parents face nearly identical threats from today’s government magistrates … and from the teachers they pay.

Remember Arne Duncan? The Obama reform czar? He went full Horace Mann on suburban mothers. Said they were deluded about their children … and their education.

And he said government would rescue these kids … because you ladies are just like those 19th century Irish yucks.

So it’s deja vu all over again …

Your children must be saved … from you.  Even if you’re not Irish. And that’s what they’ve been doing for the last decade. Except they’ve made a mess of things.

They’ve imposed the weird and wild on your kids. New theories about math and reading  and testing. New attitudes about play and rigor. New codes of speech. New mores. New tolerances. New traditions. Even new histories.

And they never bother with your approval …

The National Education Association … the nation’s largest teachers’ union … is threatened by homeschoolers. Afraid they might create a popular alternative to government schools. Fearful they might embarrass public education.

They also “earn higher GPAs in college and graduate at higher rates than their public school peers.”

Homeschoolers threaten the government monopoly on education … and that boils their wrath. That’s why they want them back … under their thumb.

Another David and Goliath moment.

They want your children and your schools stuffed into that-one-size-fits-all box. And no child gets out … because parents cannot be trusted to do right by their own children.

Time to walk right up to this fight. 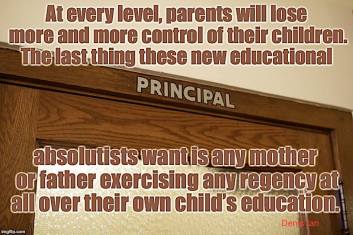 Change in Definition: Homeschooling May Take a Hit

Homeschooling Mother Arrested in her Home is Now Suing