Is there a suicide prevention hot-line for teacher unions?

“A half-century ago, teachers unions had a place in the American public. Now they have forgotten their place … going from protectors … to enablers of greed and malfeasance.”

Half of America now sees teacher unions in a negative light. And the unions won’t stop poisoning that well of public opinion. Their promise of more aggressive activism has energized lots of resistance … even among teachers themselves.

Like many issues today, public education is as edgy as it gets. Old guard unionists are now squeezed between radical activists and an exploding phalanx of fed-up parents and disillusioned teachers.

Teacher unions have always gotten their juice from the moms and dads they serve. They earned that favor with “their vision for improving public education: More arts classes and fewer standardized tests, more equitable funding and fewer school closures.” That was a winning strategy.

Then they threw it all away.

Today, too many Americans “see teachers’ unions as a negative influence on public schools.” What the hell happened? Where did all that good will go?

It’s hard to know where to begin.

They became political big-shots. They sold out to suspect reformers and protected seedy characters. They paid less and less attention to the classroom teachers … those important everyday professionals. Instead, they fell in with social justice hellions … answering to radical factions rather than to the parents who owned the schools … and paid the bills.

And they deserted children, too.

Unions listened more intently to social justice demagogues than to educational professionals whose expertise … and dedication … made American public education the great social equalizer. They swore off measured reforms and reprioritized the ambitions and intentions of public education.

And they didn’t bother to ask parents …

the moms and dads who had values and attitudes they didn’t want disturbed. Morals and behaviors they valued as indispensable.

Lots of bad genies got out of the bottle.

They backed Dreamers, the transgender ideology, and graphic sex education programs that have gagged … and enraged … parents across the country. 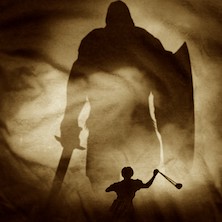 Militant ideologues whose dogma became more important than their classroom pedagogy … or any child.

And then Goliath got thumped.

Parent-teacher Rebecca Friedrichs sued her union … the California Teachers Association … when she “witnessed union forces bully and intimidate teachers, parents, and children, and work overtime to create a culture of fear.”

Her lawsuit set the stage for the most important court ruling of the last fifty years … and  her best-seller … Standing Up to Goliath … crystalized the national disenchantment with the new radicalism of teacher unions. 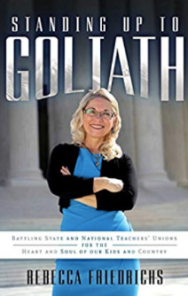 A subsequent Supreme Court decision struck down forced union membership. Teachers were no longer required to join any unions … or pay any dues … as a condition of employment.

And the suicidal strangeness of the teacher unions got scarier.

Both national unions … the American Federation of Teachers and the National Education Association …  reaffirmed their commitment to radical activism. Defiant teachers insist that such activism is part of the job description they seemed to have designed for themselves.

Still forgetting who owns the schools.

They’ve stated publicly that … despite sagging memberships … they intend to double-down on their activist agenda because they know what public education should become … and parental opinions aren’t very necessary at all.

Angered parents and neglected teachers are coalescing into a formidable opposition … willing to bump chests with those who’ve turned schools into cultural petri dishes.

because they’ve had too much.

They want their children’s education to be free of bias and indoctrination. They want balance back in the classroom … and they want real-deal teachers … not social zealots.

The great union movement that did so much to improve the lot of teachers … and students … and America … has skidded into unprofessional darkness.

And they have only themselves to blame.

1. Standing Up To Goliath Rebecca Friedrichs has told the inside story of her decades long struggle against teachers unions in her new book, Standing Up to Goliath: Battling State and National Teachers’ Unions for the Heart and Soul of Our Kids and Country.

2.   NEA Adopts Radical Agenda  During the National Education Association’s (NEA) annual meeting and representative assembly held in Boston from June 25-July 5, delegates approved 159 new business items, with one of the most radical proposals — promoting the LGBTQ agenda — coming in at number three on the list.

4.  The Decline And Fall Of Teachers Unions   “These unions are worse for the students since they hide behind the eternal banner of “We care for the kids”, yet they go to notorious lengths to protect their worst members while refusing to benefit their best.”

5. In The Wake of JANUS – Union Memberships Declining    Michigan public workers opting out of unions in larger numbers since right-to-work law. In June 2018, the U.S. Supreme Court established right-to-work for public employees across the nation, holding in Janus v. AFSCME that compelling these workers to pay union fees violates their First Amendment rights to freedom of speech and freedom of association.

6. AFT Union President Thinks YOU’RE Racist  Well, it’s a good thing public schools have gotten rid of their segregation, right? Except they haven’t. If anything, public schools are becoming more and more segregated, according to a Government Accountability Office study last year. School choice is a boon for poor and minority students, giving them more possibilities that wealthy whites take for granted. It also represents a threat to the interests of Weingarten and the AFT, who have a significant financial stake in protecting their monopoly. Despite the tremendous power, finances, and political influence of education unions, she presented the school choice fight as an actual “David vs. Goliath” scenario where she and the AFT are “David.”

7. Let’s Drop Common Core and Let Family’s Choose    “Although teacher’s unions and public school bureaucrats consistently attack vouchers, tax credits, and charter schools under the heading of “school choice,” many families are confused by the terms and even more confused as to why anyone in an education vocation would fight something that would allow parents to decide how their child is educated.”

One thought on “The Teacher Union War On Parents”