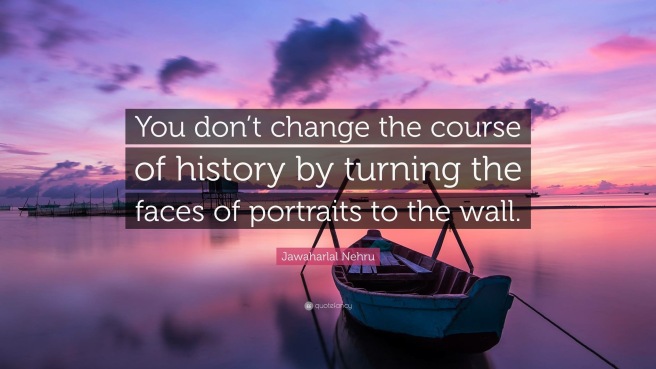 This is the “slippery slope” everyone’s talkin’ about.

Let’s get somethin’ straight from the jump.

Every person on this planet has built-in contradictions. Appearing one way, and acting another. We’re kinda messed up.

And sometimes, circumstances we might not fully understand … put some historical figures in some very bad company. Along with their contradictions.

It’s the rage to play this intellectually immature game of “Historical Equivalency”. A sloppy craze of treating historical people as though they’re Parcheesi pieces that can be moved around the game board of history … and then use it to make asinine equivalencies.

It’s historical malpractice to tear people out of their past … and then glue ‘em into the present.

Remove Julius Caesar from his historical moment … and value him by today’s standards … and he’d rank with the worst of the worst. A genocidal psycho … forbidden from any praise or glory.

In fact, ancient Rome … and all who lived there … would have to be classified as the most debauched city in the history of the world. A sludge basin of funky sex and extreme masochism … with a population obsessed with endless gore and carnage.

But that’s the current rage … and that’s the confusion clumsy thinkers make when they mix yesterday with today.

Makes for good movie plots … but it makes for shitty-messy history. Because it’s not real. It’s all out of context.

Christopher Columbus … a 15th century figure … has been re-evaluated by 21st century standards. So he’s had a fast skid down that slippery slope. He’s been erased from primary education … and put on trial in secondary schools. Lots and lots of students will never understand him in the proper historical context … because the pendulum always swings wide of the truth. So … he’s be been ordered to sail off into obscurity. Bon voyage!

Transplant lots of folks into the present moment and they don’t stand a chance.

If we continue with this nonsense, FDR will be scrubbed from our books because he ordered Japanese-Americans to internment camps.

Woodrow Wilson “signed into law … compulsory sterilization of criminals and the mentally retarded …” We know his fate, right? Push him down that slope.

Planned Parenthood’s darling-founder Margaret Sanger … a flat-out racist … “maintained that the brains of Australian Aborigines were only one step more evolved than chimpanzees and just under blacks, Jews and Italians.”

Quite a gal. But she gets quite a pass. I wonder why?

He smithereened Japanese women … and babies! … in Hiroshima and Nagasaki. He makes Rommel look like a very good guy … he only killed soldiers.

And it might be Martin Luther King’s turn, too.

He’d be in big-time trouble for advising a gay kid that … “Your problem (oh, boy!) … of feeling that you have toward boys is probably not an innate tendency … but something that has been culturally acquired (What!) … Therefore, it is necessary to deal with this problem (problem?) by getting back to some of the experiences and circumstances that led to the habit (Habit? As in “bad” habit?). In order to do this I would suggest that you see a good psychiatrist (A shrink!) …”

I think King is in a heap of 21st century trouble. How long before they start rollin’ his statues down that slope?

I need to stop.

Everyone of us should be terrified of this slope … because no one understands how dangerous it is. Or how this all ends.

Perhaps … just maybe … in some circumstances … it might be smart stuff to have some old statues and memorials hangin’ around … just to remind us not to make the same mistakes again.

Perfect people scare the hell out of me … because they’re phony bastards … almost always the most imperfect of us all.

And they’re usually pretty pissy about their failings … and they do dumb stuff … to themselves and to others.

I’d rather live side-by-side with my imperfections because they caution me … reminding me to choose right over wrong. Good over not-so-good.

And still I screw up.

And so do all of you … because we’re that batch of messy contradictions I mentioned earlier … always trying to screw our heads on straight. And doin’ a shitty job of it most of the time.

But that’s okay. I wish it wasn’t true.

But it’s what happens to us all … to real people like me and you … and even those folks from the past.

So, before you suffer some sixth degree burns by ripping some dead folks out of their past and bombing ‘em into this moment … for a 21st century beat-down … be careful.

And be damn sure your house isn’t made of glass.