The author is one confused lady. In an article for “The Intercept”, a bewildered liberal author argues against herself. And loses. Badly.

The title alone is as accurate a statement as one will ever read:

Never has a progressive scribe written a more salient condemnation of public education than this writer. She must be the most unconscious journalist in all of Leftdom.

The headline of her bewildering piece says that the Right is now intent on gutting public education because of the recent student walk-out. And then the writer lists all of the wacky weirdness that has much of the country shaking their heads at the public schools of today. And it clearly goes beyond the Parkland tragedy. Way, way beyond.

And then the disoriented scribbler cites credible authority figures to destroy her own supposition. Kinda like journalistic suicide.

And the hack does nothing to prove him wrong. Nothing at all.

And in a bit of even more welcomed weirdness, she allows Levin to scorch the Progressive-Left take-over of teacher unions … and the unwillingness of union leaders to disavow that public education’s mission is now to “ push the agenda of the progressives, of the Democratic Party,”

She’s silent because there’s really nothing she can say to disprove any of this.

Then it’s on to Rush Limbaugh.

In an feeble attempt to provide some raw meat for her liberal hyenas … and to pin herself with a leftist badge of courage … the author challenges radio giant  Rush Limbaugh.

Except this writer forgot to bring a challenge … and she does nothing … NOTHING … to object to any of his truths. Never touches his logic … or his facts.

And let’s not leave out her outrage for former high school teacher Tom Tancredo.

“As a former high school teacher, I am shocked at the scope of political indoctrination and partisan manipulation now taking place in middle and high school classrooms,” wrote Tom Tancredo, a former Colorado Congressperson, following the walkouts.

And it sits there …  unrebutted. Ouch!

Then she decides to wrestle down parents. US Parents Involved in Education specifically …

It was no secret that once parents established themselves as a force to be reckoned with, that they would be attacked. And that the Progressive-Left would target, malign, shame, … and even infiltrate any parental movement that showed a certain muscle.

US Parents Involved in Education (USPIE)is the sort of parent organization that troubles The Intercept columnist … because it has the potential to equal or exceed in number ALL of Levin and Limbaugh’s followers by millions.

And that would be a challenge the Left would lose. 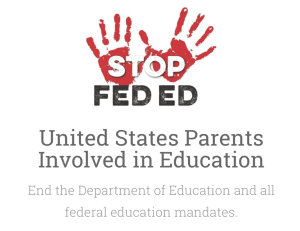 USPIE now has a presence in nearly three-quarters of the states … and their leadership is stacked with competent and courageous parent advocates who are experts on a myriad of educational issues. They’re knowledgable … legislative savvy … curriculum hound-dogs … and they know how to make their case. A talent that escapes the writer..

And these informed parents give voice to millions of other parents who … until now … have felt isolated in their own struggles with the indoctrinating nonsense foisted on their children in public schools hijacked by the Progressive-Left.

In short, USPIE is becoming a coalescing power-house in highlighting the educational collapse of the public education system in America.

USPIE demands local control restored and an ideology-free curricula. USPIE demands teacher unions be reined in … and that parents have school choice … whether it be public, quality charter, private … or a homeschooling option.

The Intercept‘s scribe reveals the Left’s attitude toward mothers and fathers across America … essentially proclaiming that if you’re not with the Progressive-Left … well … then you must hate teachers … and loathe kids … and want to “gut” public education.

There’s no room for any other option but their ideological extremism. Always the either/or liberal ultimatum.

The Intercept wants the battle lines to be as clear and as crisp as they can draw them.

But this author is late to the moment … as is the liberal habit.

Fewer and fewer seem willing to join her … less willing to step over the line and stand with her … because she has so wonderfully explained to us all how dreadful the public schools have become … highlighting in detail how biased teacher unions are today. Pointing to the indoctrinating social justice mission of too many teachers … the hijacking of students … and the mocking of parents along the way.

USPIE knows that those battle lines were drawn years ago. That their opposition to Left Wing dogma in education did not bubble over with the Florida high school event. That it’s been brewing for a long, long while.

But the writer over at The Intercept has had her eyes screwed shut … like lots of other liberals … because she felt confident in their domination of public education.

And USPIE highlights what everyone already knows … that “children are not being taught … the reasons for American exceptionalism.” The Progressive-Left ignores world-wide realities to slam America … despite this nation being the planet’s most favored migration destination.

Since when do people flock to injustice? The logic is bruising.

USPIE accurately states that this contorted “historical context leads students to believe the only way they can be safe in school is to further restrict and/or take guns away from law abiding Americans.”

USPIE argues that the real danger … the lasting danger to America … and to students of all ages … is in the hijacking of American classrooms by Left Wing zealots. That the roots of the Florida tragedy are not found in conservative precepts but in liberal practices that allowed that moment to unfold over a long period of time.

But The Intercept writer would like to flip the argument … but it’s too heavy for her to budge … because the preponderance of truths are found beyond her ideological myopia.

She inadvertently made the case of liberal causation … for liberal-progressive liability in the Parkland tragedy.

The student walk-out has had unanticipated fallout for the Progressive Left. It’s awakened parents across the nation to the reality that their children are pawns of an ideology they wish was not in the public schools.

Lots of parents took exception to the conscription of their children … without their expressed permission … into a politically motivated demonstration. The entire moment as MSN reported proved to be inauthentic and manipulative. And they were disgusted.

But the moment is not without even more liberal lunacy.

It seems The Intercept author has seen the light … and joined the parents over at USPIE. Yup! Joined the cause. Signed up! Fell in with the very people she loathe!

1. Did she join because she’s interested in a genuine dialogue with informed parents and educators with differing opinions? To advocate for child centric education policies? To demand for a non Common Core curriculum? To champion the needs of special situation learners?

(Try your best not to laugh!)

2. Did she join in an attempt to drill down into the research and stated positions of USPIE? To examine the logic of the organization’s philosophy beyond the recent event in Florida?

Better to suspect that she’s scrounging and snooping for policy nuggets to cherry pick, contort, and exploit … out of context, no doubt … to spin on purpose … to stifle parent voices that are demanding fixes for failing schools … and for ideological-free alternatives to the indoctrinating … and failing … public schools.

USPIE reminds the Progressive-Left of what they seem to have forgotten … that without parent support public education ceases to have a purpose.

And USPIE alerts everyone … especially the Progressive-Left … that parents are very aware that teacher credentialing has also been usurped by the Left. And that it is fully Common Core aligned … all orchestrated by and written by Progressive-Leftist reformers. The infection is impossible to hide any longer.

USPIE is unafraid to spotlight the startling transformation of teachers into digital ‘facilitators‘ … losing their classroom autonomy, their self-respect, and their professional voice. Conformity and solidarity with the union machine is now part of so-called professional development. And the millions and millions of dollars they demand for this “professional development” is … in reality … a push to deliver ideology-infused education to captive audiences of children.

USPIE has been throttled into national prominence in the midst of the very good company of Mark Levin and Rush Limbaugh  and others. They are powerful, national voices  willing to highlight the everyday educational atrocities occurring in government schools. USPIE should seize this opportunity to amplify and add its voice to this moment. Thank you Intercerpt!

A final word to parents across America …

Now you know that when you raise your voices, the Left hears you and fears you … because you are a threat to the Liberal-Progressive status quo in our public schools.

They are frightened to see educated parents band together as rightful stakeholders in their public schools. Frightened of your demand to be heard and respected. Frightened that you are so alert … and so informed.

Expect the Progressive-Left to ramp up attacks on all parents … to belittle you and berate you … and paint you as a fringe threat to the public schools.

Revel in those invectives … and in those snubs.

It is an unmistakable signal that you are finally being heard. A sign that your stamina is fierce. And that truth is on your side.

Join the movement at USPIE … be a part of the triumph in restoring American public education to greatness.

So, who is The Intercept author of the willfully ignorant piece of prose?

She is a contributing writer for The Intercept … and a freelance journalist based in Washington, D.C. Her work has been published in the Washington Post, The Atlantic, and Vice … among other outlets.

(PS. We’ve been asked if this is Rachel that runs the Choose to Refuse FB page, No it is not.)