“… a little rebellion now and then is a good thing …”

America is under siege.

“Government is more like a crime family than a government.”

Liberal zealots and their plotting bureaucrats will destroy the democratic pillars of this Nation because this Presidency threatens their political influence … and checks their cultural influence.

They are willing to sacrifice this Nation in order to destroy Donald Trump.

America is in the midst of a conspiratorial coup d’état. A surreptitious constitutional challenge from the corrupt Far Left.  And as the days pass, this mob becomes more reckless … less restrained … and more unethical.

It’s time to be alarmed by this liberal syndicate and their gangland tactics that have weaponized federal agencies.

They’ve contorted the Constitution, broken laws, endangered national security … and polluted this nation with destructive ideologies that could forever change the character of America.

They are more like a crime family than a government. They dispense justice viciously … laugh at the law … and the most notorious among them become the most wealthy.

They are a National danger.

This challenge … by these political eels … defies the citizens of this nation. They appear before authorities having obscured evidence, manufactured nonsense … and then they tell us that what we see is not what we see.

This political mafioso seeks to nullify an election … invalidate your vote … and annul your choice for President.

The government seems like an underworld operation … and those who manage it seem like  political gangsters … racketeers … civic goons.

They’ve used the IRS to intimidate political opposition. Installed activist Judges to defy legitimate presidential orders. Empowered the Department of Justice to ignore laws … and deny justice. And they have permissioned the CIA and the FBI to invent political intrigue in order to subvert an elected president.

Robert Mueller’s investigation lives on eternally … the suave consigliere deftly bending laws and shaking down anyone connected to President Trump. A master wiseguy who shades the law as he sees fit. 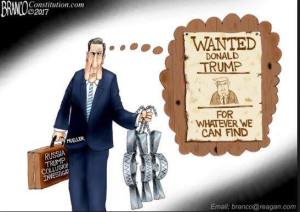 “The Romans broke their republic. Now we’re breaking ours … But the Roman lesson is that once you break the republic, it stays broken. Once you use political mercenaries like Mueller to overturn an election for you, they might not stop.”*

They dare you to stop them. Dare you to protect your President.

Dare you to stand up for your country.

“This nation will remain the Land of the Free only so long as it is the Home of the Brave.”

Expose those who would destroy America from within.

America is on the verge.

*WATERGATE EVERY WEEK – USING THE FBI TO SUPPRESS A POLITICAL REVOLUTION: From Steele to Mueller, the cost of overturning the 2016 election.