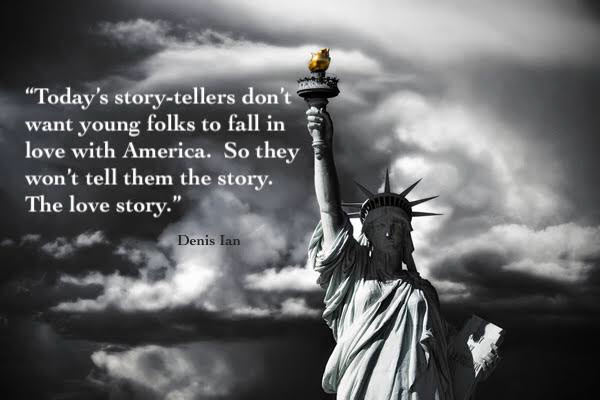 “Every great love starts with a great story …” ~ Nicholas Sparks, The Notebook ~

So they won’t tell them the great story. The love story.

And too many are in this indifferent stupor … and don’t seem to care if some textbooks lie about our history …  twist our story. And mislead the generations to come.

These biased writers bend some facts … and braid some lies … and coil some disinformation into officious, weighty textbooks because … well … they know you won’t do a thing. Except pay for it.

They’re out to get America. To accuse her. Indict her. And convict her.

So … few are shocked by James Fraser’s Advanced Placement textbook … “By the People” … and its open bias recollecting recent events in our story. 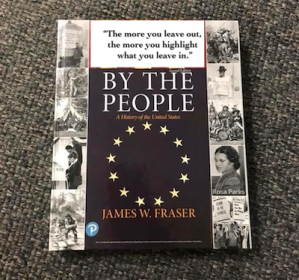 And he’s extra unhappy with the people who made that happen.

“Trump’s supporters saw the vote as a victory for the people who, like themselves, had been forgotten in a fast-changing America–a mostly older, often rural or suburban,
and overwhelmingly white group.”

Pssst … he’s talking about you … old white folks … who live in the ‘burbs. You know … the ‘ists’ … misogynists and racists … and so on.

“Most thought that Trump was too extreme … but his extremism, his anti establishment rhetoric and … his not-very-hidden racism connected with a significant number of primary voters …”

Oh! We were supposed to like the mess we were in … the Obama mess … and vote for more abuse. I didn’t know that. Did you?

“Clinton’s supporters feared that the election had been determined by people who were afraid of a rapidly developing ethnic diversity of the country, discomfort with their candidate’s gender, and nostalgia for an earlier time in the nation’s history.”

Pssst … pssst … these Trump voters didn’t like illegals … and murdering Muslims … and they liked straight sex … and traditional values.

“They also worried about the mental instability of the president-elect and the anger that he and his supporters brought to the nation.”
So they elected a nut.

And that’s all you have to know about the 2016 election of President Trump. That it was a mistake … and the wrong people voted for the wrong candidate for the wrong reasons.

And now … America is a very wrong place. And it’s your fault.

And that’s their story! And they’re stickin’ to it.

Everyone knows what’s left out of that story … even Mister Fraser. He forgot something very important: the truth.

He didn’t really forget it … he ignored it … because the truth didn’t help create the America he wants.

So he turned the facts inside out … and made up a bad story … about America. And put it in a textbook … that your kids will read … and study. And believe.

“The shortest distance between a human being and the truth is a story.” ~Anthony de Mello

Fraser poisoned our story. Killed off the truth. And now our brightest students … the advanced placement scholars … will read his lies … and think his fiction is fact.

Lots already believe that America must be altered, changed, renovated, rejuvenated, redirected … and most especially … cured.

They insist that America is a bad actor that needs to be shamed … and made to appear as sinful as every other wretched country on this planet. 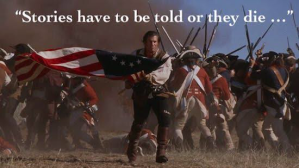 “Stories have to be told or they die, and when they die, we can’t remember who we are or why we’re here.” ~ Sue Monk Kidd, The Secret Life of Bees

And that’s what liberals want. For us to forget. To unremember how we came to be … and not know the story of how we became great.

Our story is fading … becoming hazy and blurry … as others re-write our past. And change the facts. And silence those who think this is an exceptional nation because … because that makes us standout a bit too much from the rest of the miserable world … and we can’t have that.

So we’re head-bashed into sympathizing with monster Islamists out collecting heads in the sands of the Middle East … and who will one day rocket us into a modern armageddon of real life-or-death preservation.

It now seems wiser to “understand” our enemies than to challenge them. More noble to search for the vomit-inducing “root cause” than to smash them back.

So we’re taught to ignore historical realities … like borders and marriage and the importance of the family. Told to accept this and that … even though it all goes against the laws of nature or simple common sense.

“The purpose of a storyteller is not to tell you how to think, but to give you questions to think upon.” ~Brandon Sanderson

In schools today, espousing contrarian points of view will earn a tattoo as a racist, a xenophile, a homophobe, a sexist, a capitalist-pig, a neanderthal … or a pathetic conservative.

The flood-gates are wide-open for every miscreant to bitch and set the record unstraight. And whorey intellectuals … like Fraser … are determined to retool this nation into a supplicating, value-free, nonjudgmental mess. Hoping for us to become just another messy nation.

And remember this … because it’s true …

“People are hungry for stories. It’s part of our very being. Storytelling is a form of history, of immortality too. It goes from one generation to another.” ~ Studs Terkel

and not let it be corrupted by bigoted historians who scribble two-pound history books full of lies. 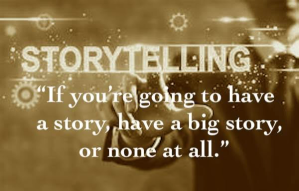 “If you’re going to have a story, have a big story, or none at all.” ~Joseph Campbell~

Living with Politics as War