My father’s name was Connie … and he was impossibly strange.

His father dug tunnels in New York City.  A sandhog.  His mother did it all.

Both “off the boat” … the same boat … from Cork. Dan and Kate. And I couldn’t understand a word they said. The brogue.

My father was over-educated because my grandparents were so uneducated. But they made sacrifices for their son and  … after grade school … they grew his discipline at a military academy … then at a Jesuit college.

And so began a lifetime of over-achieving.

He graduated from Fordham University in June … and was teaching there the next September. Over the years, he settled into destinguished situations at CCNY … and NYU  … and Baruch College. These stints were punctuated with longish sabbaticals in the business sector … rewarding opportunities that relieved the financial stress of raising a large suburban flock.

Even then he taught night classes … because teaching was his forever-mistress.

He could actually speak Latin if he wanted to … and quote Shakespeare all night … in perfect theatrical diction. The NY Times crossword puzzle was conquered in minutes. He would answer simple questions with meandering soliloquies … and fat questions with skinny answers.

He could cocoon himself instantly. Aloof himself.  Be somewhere else as he sat at the head of the big table with the fat legs. Apparitioning himself into a far away dimension. Ghosting us all. Making the here-and-now an echo in his head.

He was fascinatingly odd. I’ve never met anyone like him.

He had long-imagined himself a priest. A Jesuit. One of those earthy servants of Christ who smoked too much, drank too much, and thought too much. He was very good at all those things. And like lots of Jesuits … he sometimes seemed borderline crazy.

So he was eminently qualified for the Jesuit life. A semi-worldly, contemplative existence replete with top-shelf liquor and handy cigarettes.

Until he lost his mind over my mother … Helene.  A German beauty.

He went into a sweet skid … and his life veered beyond his control.  His earthy impulses went wild and fleshy … and suddenly there were seven kids. And a batch of guilt. About the impulses. Not the batch of kids.

And that explains why “The Last Temptation of Christ” was on his night-stand until the day he died. It’s a much argued book with the sketchy premise that Jesus …while free from sin … was still subject to fear, doubt, depression, reluctance … and even lust.  Just like my father … except for the sin-free stuff.

He tried very hard to understand why he was so easily conquered by that Teutonic temptress who would give him all those sons. He was unused to the unsolvable. Puzzled by the passion-love thing that knocked him off his theoretical cloud  … and bounced him down to earthy-earth. 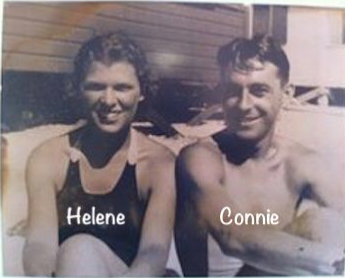 I told you he was complicated.

The family stuff happened only after he talked it over with God … in a likely one-sided conversation which God sort of expected from him.

Then he went forth and multiplied. A lot.

All six sons were christened with very substantial names … like Cornelius Michael, Brian Francis Xavier, Kevin Charles, Barry Daniel, Denis Stephen, and Rory with no middle name … because … my father insisted … “With a name like Rory … he doesn’t need one.”

Eileen Marie was the solitary princess-daughter at the end of the boy-line.  The ever-startled girl in the boys’ locker room … living her young years among cleats and jocks  … and sometimes naked brutes. And with every seat up.

Those were our serious names. The names he used when he was serious … which was pretty much all the time.

But we each had a soft name, too.

I was “The Denis” way before there was “The Donald”. That was as soft as he could get. But it always smiled me. Still does. I get what it means. I always got the message.

He favored simple commands like “Solve it!” and “Get it done!”. But there was one commandment above all others. The one we expected to hear. All the time.

I’m sure those were some of the first words each of us remembers. And we heard them every time we were trotted out for swim races and football games … and exams and interviews … and first days on the job. Before heading off to war. Ahead of weddings. And while staring through maternity-ward windows … showing off brand new sons of our own.

I came to understand those words. And so did my sons. And my sons’ sons.

The message is not as simple as the words.

It was said in a level tone. Nothing noisy. Perhaps with a slight nod.

So that’s the three-word legacy. The terse life-credo that served my Father’s lawyer-sons, teacher-sons, and warrior-son very well. Because we, too, are all over-educated over-achievers. And over-complicated. And probably borderline crazy.

My Father left us more than forty years ago … when I was just twenty-six.  Before my own sons could know him. …. and hear him quote Shakespeare … or ramble on in Latin … or hear him speak that short commandment.

They only know of him. And that has always seemed unfair.

I still haven’t forgiven him for that quick exit. So typical of him to … to just travel off without a word. And leave us to wonder where he’d gone.

I needed to learn more about him … and he would have unbuttoned my brain perfectly.

If only I could spend just one long afternoon with him. Sharing some favorite sins. Toasting this and that. Trotting out my own sons … all with substantial names … so he could share my biggest joy. And nod at me.

Just a few hours locked together … so he might examine my own life. And meet the lives I’ve made … my teacher-sons and my doctor-son. The sons I dared to “Be the best”.

And perhaps he would smile at me. For a long moment. And call me by my soft name. Before he vanished again.

Then … then I could wait for that moment when we meet again … and finally fix the cracks in our hearts.

You should listen now … so you can feel the story you’ve just read.

“Ghosts That We Knew” -Mumford and Sons CLICK HERE TO LISTEN 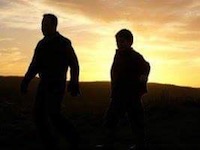 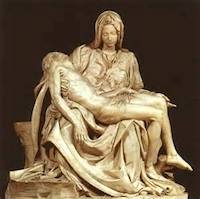 One thought on “The Cracks In My Heart”