The real trouble with reality is that there’s no background music.

I so wanna hear some music right now … because the moment needs it.

More than half a lifetime ago … when my world was moving so fast … I had a friend who helped me catch my breath. And I did the same for him.

An unlikely pair … with one shared truth:

We were stumbling somewhere. And tryin’ to be cool about it.

There was lots of everything in our lives. Especially music. Mostly supplied by him … not me.

And for a time … not a very long time at all … we leaned on each until we careened into the lives that would become our stories.

Different backgrounds, different talents, different hustles … but there we were … glued together … when we were invincible.

That was back in our salad days. The twenty-something time … when we’d hoist beers and laugh at clocks … and head to bed as the sun was getting up.

Now … now my friend’s face is tin-typed in my mind. He lives in a long ago time.

We were both crowd-pleasers. Showmen. Performers.

We stood in front of small crowds … polishing our act. Building our own brand. Learning as we stumbled on.

I was the rookie teacher with more energy than craft.  Just out-of-the-box. 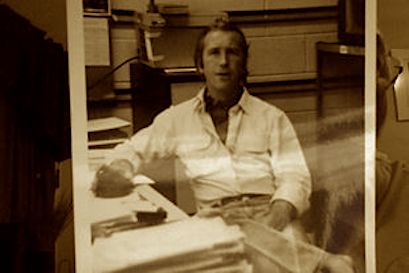 Searching for that magic formula that would grow a professional persona. Takin’ it all in as fast I could … borrowing this and that … learning from everyone and anyone. Trying on all sorts of stuff to make it all come together.

He played guitar gigs. A solo act … just like me. Packing his trunk for trips farther and farther beyond his comfort circle. Trying new stuff, too … creating his stage-self.

He was a special talent. The voice … the guitar … the timing. All coming together.

At that moment in our stories, he was more polished than me. And now … decades later … I know something I should have known way back then.

He helped me cut it as a teacher.

He owned skills I needed. So I stole ’em. And put my own stamp on them. And he saw me work, too. Loved the orchestration and the rapport. The creativity.

And we’d pull this stuff apart … in the late hours … over tired beers. Unlikely sidekicks. The troubadour and the teacher. And for a short time, our lives got tangled up.

And it was cool and good. And fun.

An effortless closeness … like the easy links I had with my own five brothers.

His name was Bob Mulcahy.

He saw my life swerve at light-speed when I was engaged and married in the same year. Then I watched him swap “I do’s” from just a few feet away … as a “buddy shover” … in case he needed a last minute jab.

Then our lives took off. Like rockets. And veered apart.

My first son arrived eleven months after the aisle march … and the second guy showed up right on his heels. I did my first stint at the high school level when a legend became ill … and I was suddenly fitted for some very big shoes.

Ribsy was on the move, too. Better venues … and larger stages. And a first son, too.

We’d catch up now and then … always pledging to get together again … but we were really just trying to keep it all together. Pretty much like all new families do.

John Lennon had it right …

“Life is what happens to you while you’re busy making other plans.”

And then the calendar flipped like in the cartoons … and in a flash we were lost friends. Pulled apart by life.

I thought of Ribsy lots. I did. Every time I saw a guitar … or heard some young talent trying to cut it as a songster. But … but I guess I didn’t think about him hard enough.

And he didn’t think hard enough about me.

We probably shared the very same excuses for not catching up with each other. Just as brothers do. It’s an Irish thing.

I made efforts to locate him … but they weren’t terribly valiant.

I’d scour the Sunday entertainment papers … looking for a gig announcement. And I’d ask around. Then … when the technology improved … I’d give the search another shot every few months.

Nothing. As though he’d fallen off the planet.

One Sunday … last summer … I found him.

Ten years too late. Twelve hundred miles away. In Pensacola.

A mindless keystroke … and a four-sentence obituary glued us together one last time. 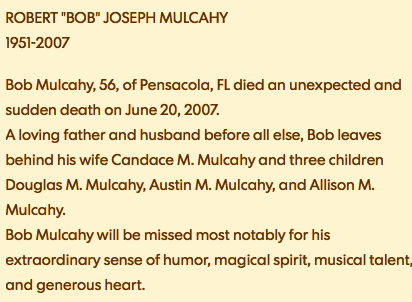 It was a dreadful reunion.

I spent a long hour or so … during the morning sunrise … on my deck … re-squinting at that screen … and then staring at a big moss-rock I’d dubbed “The Crying Rock.” A backyard spot for weepy grandkids to get over a broken toy … a spilled bottle of bubbles … or a home-run that was really wasn’t.

It was my time. Alone. My time … with that rock.

Bob was gone ten years and one month when I found him. But it was news to me. Brutal news.

And it just slammed me … and I’m sure you understand … because it’s probably happened to you, too.

Now … now there’s no music … because Ribsy took it with him. No chance to color in our lives for each other … because he’s gone somewhere … and I’m still here.

Starin’ at a rock.

CLICK TO LISTEN -Ray LaMontagne “In My Own Way”

One thought on “Lost Friend”